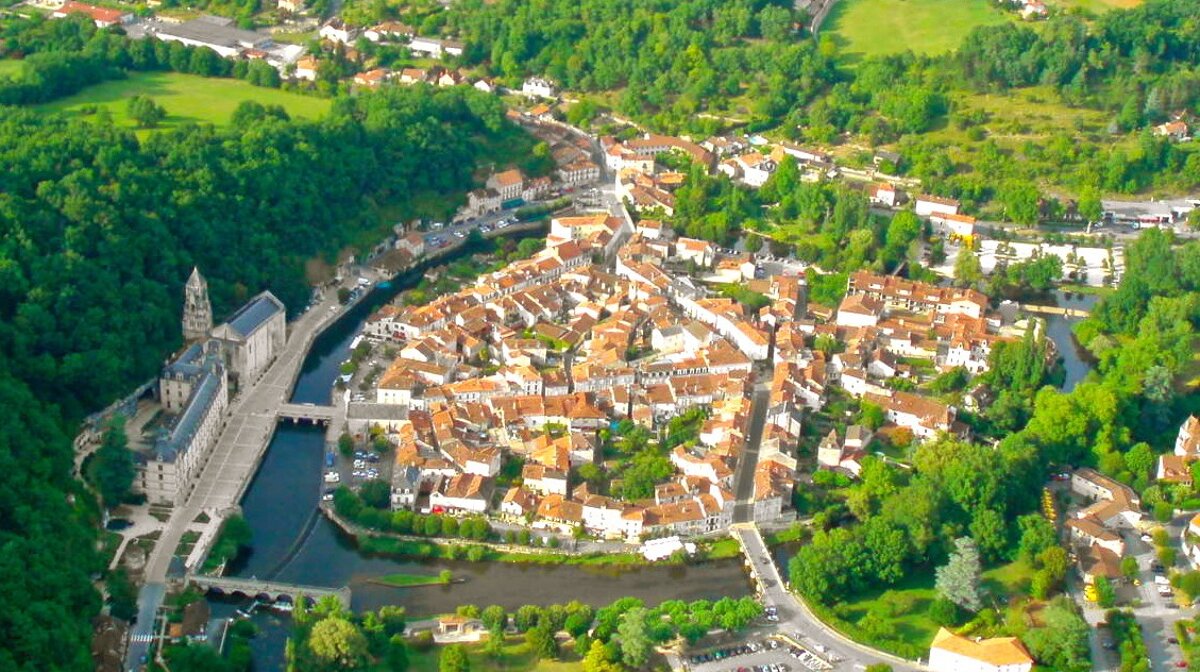 Brantome from the air

Located on an ancient Roman road, the town of Brantôme on the Dronne river is centred around its 8th century Benedictine abbey.

Perhaps overdoing it, it is sometimes known as the 'Venice of the Dordogne'. It is however an extremely pretty town. You can talk long walks along the river, or hire a canoe and paddle around. Its Friday morning market is famed for selling local delicacies in the winter months.

The Benedictine Abbey of Brantôme, was founded in 769 by Charlemagne and the town grew up on the small island opposite which is encircled by the river Dronne. The abbey was pillaged in 848 and in 857 by Viking rovers who had advanced along the Dordogne and Isle rivers to the Dronne. Rebuilt towards the end of the tenth century and again in 1465 and in 1480 after the end of the Hundred Years' War.

Its Romanesque bell-tower is a competitor for the title "oldest in France" and has developed a high reputation.

The beautiful Abbauye de Brantome is the main visitor attraction, and beauty spot, of the town. You can visit the chapel and take a tour which allows you to reach the dizzy heights of the bell tower for some magnificent views.

The weekly market here is a must! It is large and occupies much of the town centre on a Friday morning, As well as regional products and crafts you an also find clothes and accessories here.

Things to Do in Brantome

Paddle along the river, visit the markets and just enjoy the beauty of this lovely town on the banks of the river Dronne. There is plenty of walking, cycling and general sightseeing to be done in and around this area. But if you are looking for something a little different then maybe consider arranging a trip to visit the Brantome Police Horses...a real treat!