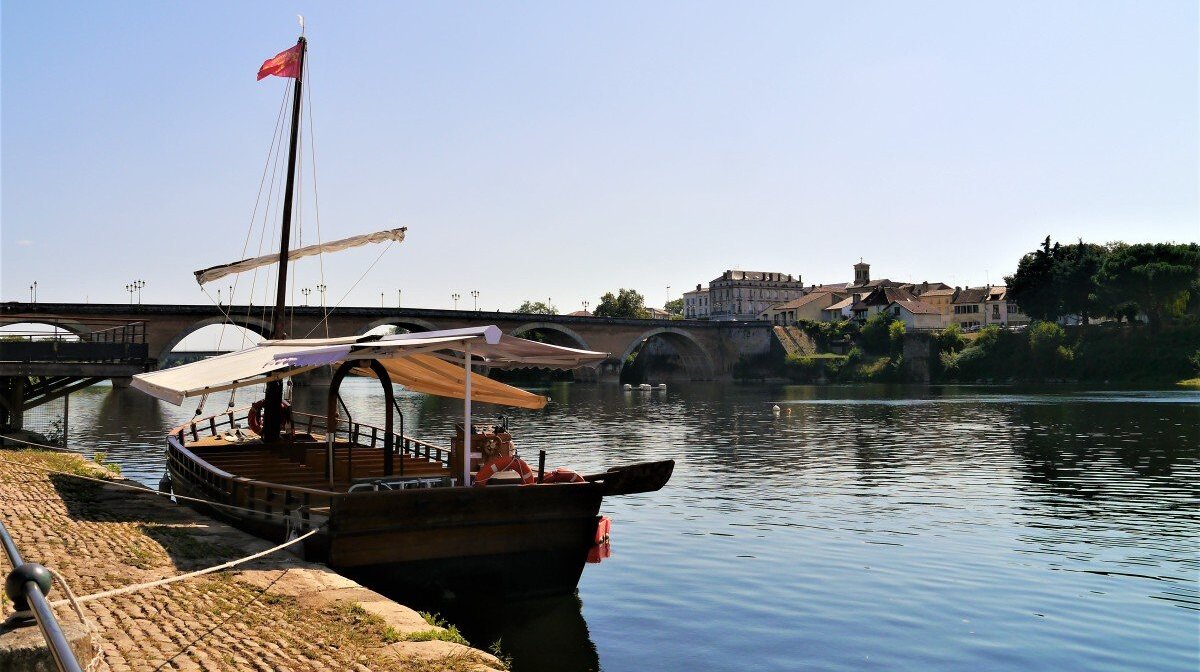 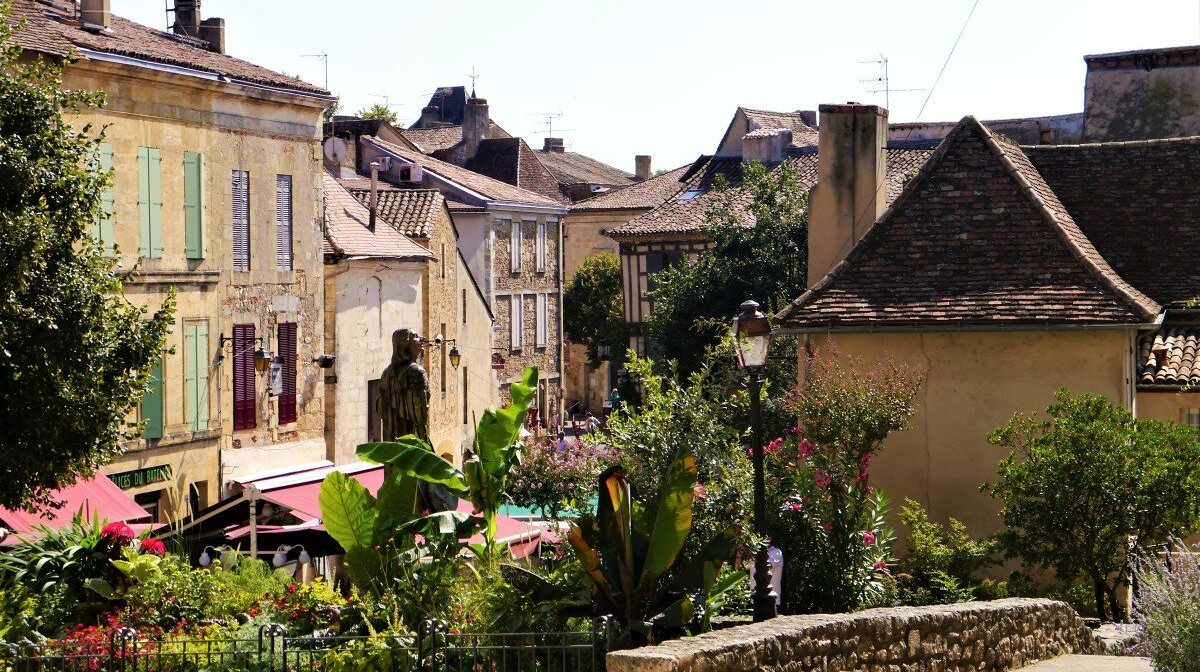 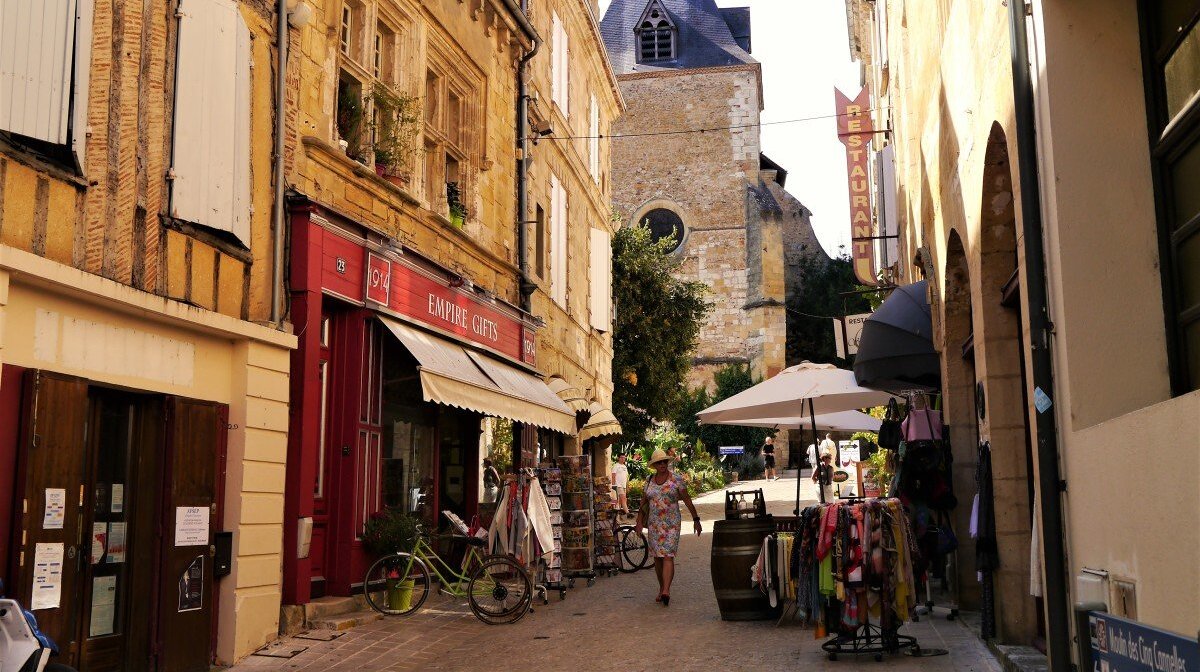 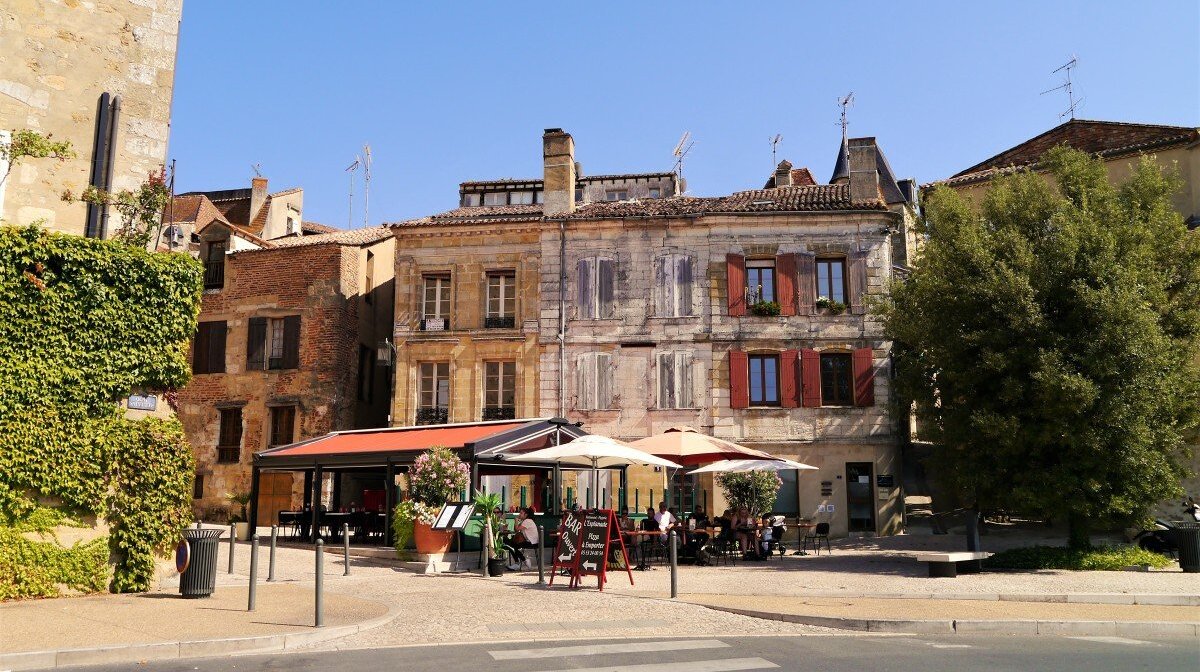 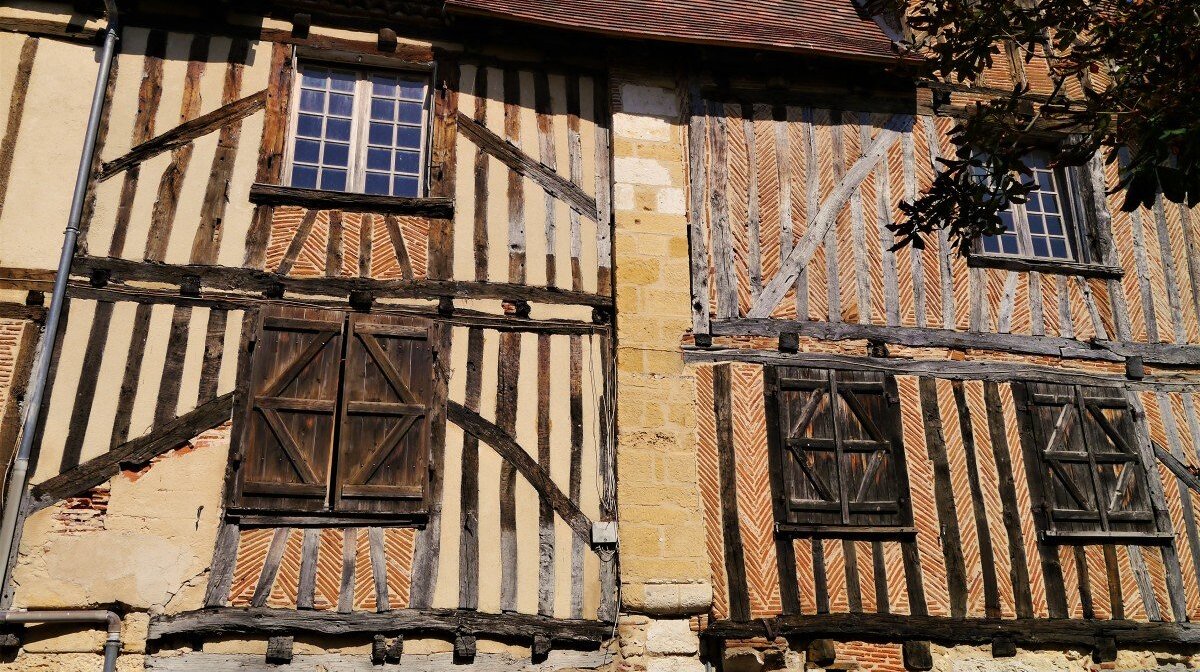 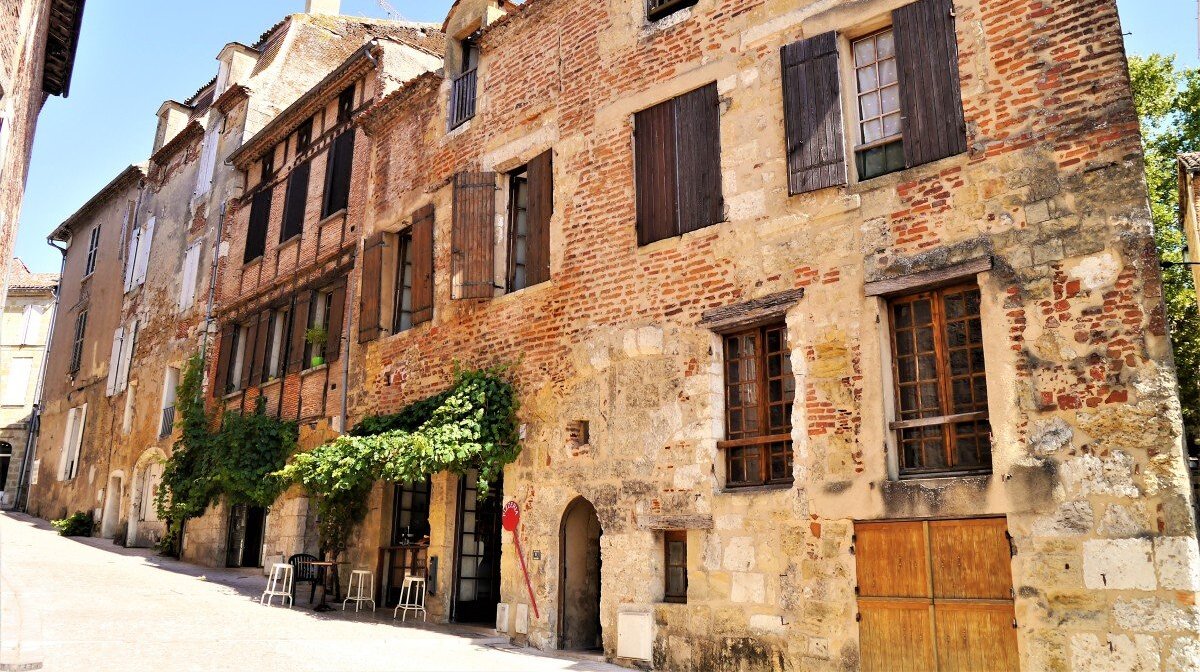 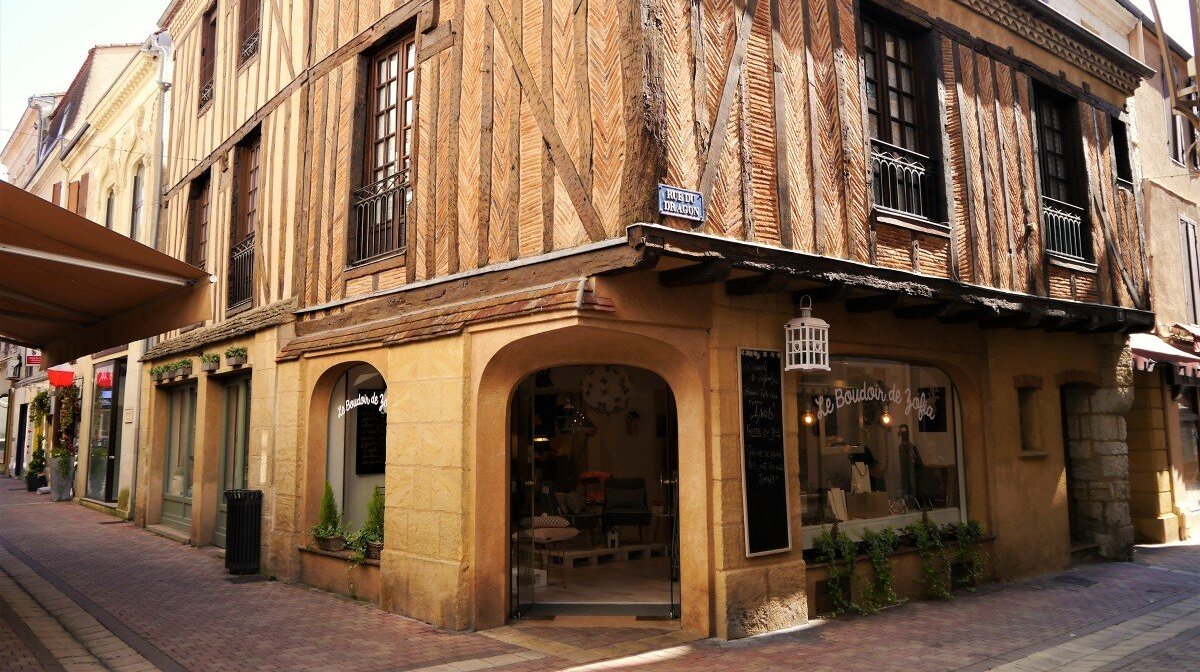 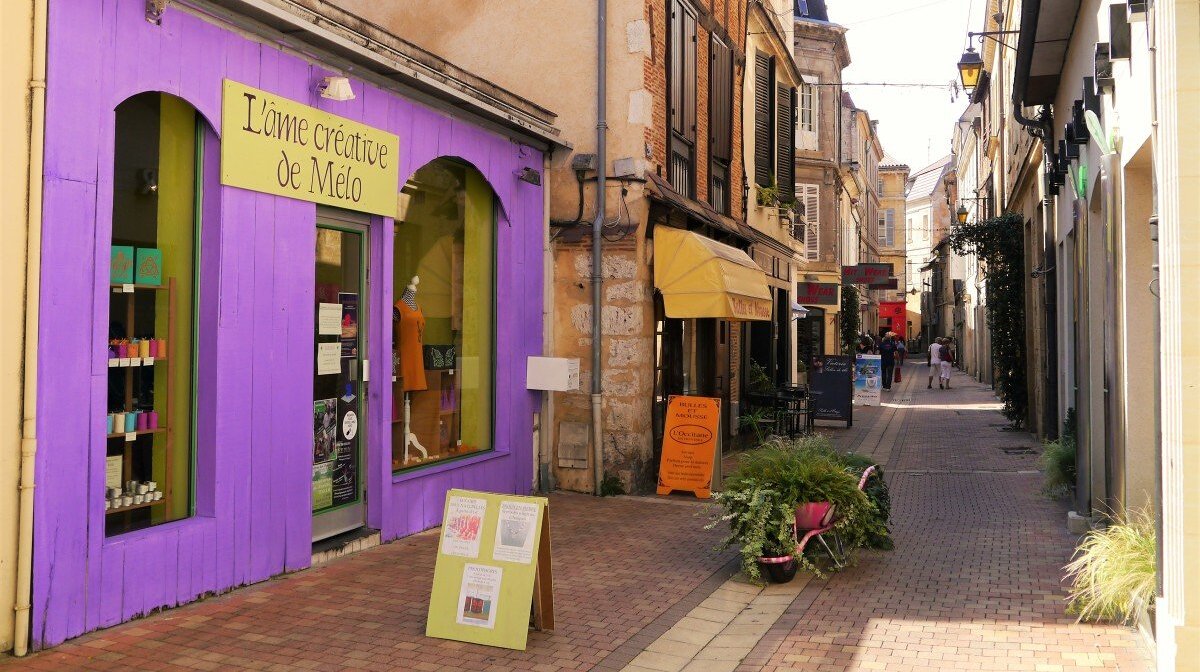 The river front in Bergerac

Shops in the Old Town of Bergerac

The largest town in the area, Bergerac, still retains a quaint old feel, with a change in pace in the summer months.

It sits on the banks of the Dordogne river which enabled its growth back in the 11th and 12th centuries when it supported the region's wine export business. In the 16th century it was a focus of the Wars of Religion, which eventually resulted in a peace treaty being signed in Bergerac. Today its attractive old town, with cobbled streets and boutiquey shops, bring in the tourists from its international airport. In fact tourism and wine making are now the towns biggest and most successful industries.

Originating back in the 11th century when a castle was built on the site on the banks of the Dordogne river, the area quickly grew up around the castle and the town became a popular stop over for travellers, pilgrims and traders.

The area has always been a popular hub for wine production but later was also known for tobacco and earthernware. The appearance of the 'vine louse' was a turning point in the local economy. This vine disease from America, devastated the Bergerac vineyards in 1880, forcing the wine-makers to replant on better plots. The graft of a French vine stock to American roots impervious to the parasite re- launched the wine making activity.

The town's name at least is perhaps better known from the play and film 'Cyrano de Bergerac', where French favourite, actor Gerard Depardieu plays the main character Cyrano. The story goes that Cyrano de Bergerac, a soldier and poet, is in love with Roxanne, but due to his appearance he is afraid to admit it. When a cadet, Christian, enlists Cyrano's help to woo Roxanne by writing love letters for him, Roxanne quickly falls for Christian without knowing that she is actually falling for the words written by Cyrano. She marries Christian, and Cyrano continues to keep the other man's secret, even after tragedy strikes.

However, the actual Cyrano never lived in Bergerac!

The area of Bergerac offers some of the finest wines due to the excellent soil drainage and proximity to the Dordogne river. There are numerous chateaux and vineyards to be visited in this part of the Dordogne.

In addition to the vineyards and estates there are also plenty of other chateaux and gardens to be visited that offer fun for all the family. Within the city of Bergerac itself you will find several museums, including the Musee du Vin which gives you a good insight into the history of the region.

The most recent statue of the infamous character 'Cyrano de Bergerac' is situated in the square outside the Eglise Saint-Jacques, which has plenty of cafes and is a pleasant place to stop for lunch, coffee or a glass of the local Bergerac wine.

Things to Do in Bergerac

There are plenty of family activities in and around Bergerac, from mini boating adventures to letting fairies guide you round a maze. Medieval games are also popular and you will find these at some of the more popular chateaux in the area.

A trip on the Petit train de Bergerac gets you orientated in this small city and takes you past most of the main attractions so that you know where to head when you step off the train. A fun ride for kids, with an audio guide that gives you an outline of the city's rich history.

Although better known for its viticulture than its gastronomy there are plenty of places to find a good meal in Bergerac and in the surrounding countryside. Each meal should of course be complimented by an excellent Bergerac wine!

Where to Stay in Bergerac

Although this is a relatively small city you will find a decent selection of hotels to suit all budgets.

Where to Stay in Dordogne

How to get to Bergerac

Situated on the banks of the Dordogne river, just 18km from the Dordogne / Gironde border, Bergerac is the first main city that you will reach if you are travelling into the Dordogne region from Bordeaux.