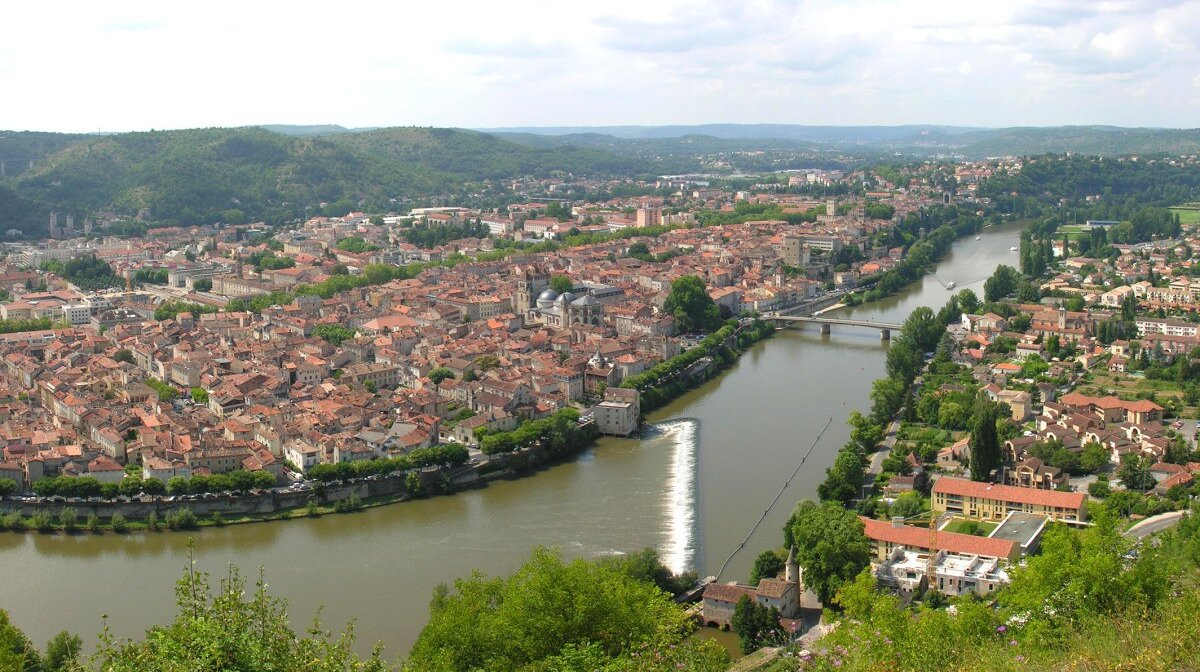 The town of Cahors

Formerly the capital of the old province of Quercy, Cahors is the largest town in the Lot valley. The site was inhabited by the Cadurci tribe in Roman-Gaul times.

The town sits on a tight meander of the river Lot and on the pilgrimage route to Santiago de Compostela. Today its economy comes from the land - wine and agriculture - and from tourism. Perhaps best known as the centre of the famous AOC 'black' wine known since the Middle Ages and exported via Bordeaux, long before that region had developed its own viniculture industry.

Its most famous sight is the fortified Pont Valentré with its three square towers which dates to the 14th century and is the city's emblem. The current cathedral, Saint-Etienne, dates to the 12th century.

The first cathedral was erected in the 7th century by the bishop Saint Didier, and the bishops of Cahors went on to have control over a large regional area. Cahors' bishop, Jacques Duèze, was named Pope John XXII in 1316 and went on to build a palace in Cahors, as well as founding the university.

However it has declined economically since the Middle Ages, and lost its university in the 18th century. Today it is mainly associated with the appellation of the same name, and has become a popular tourist destination which has boosted the economy.

With a long history in producing full bodied red wines, how can you resist a visit to one of the many vineyards in this area. The Cahors appellation is well known in all parts of the world so expect to enjoy some with your meals and make sure you have space in your bag to take some home!

The town is full of history and stunning examples of architecture from various periods in time. The Pont Valentre and the Cathedral are just two examples that are worth visiting.

There are many small events and festivals that take place in this town, but one of the most celebrated and popular without a doubt is the 'Lot of Saveurs'. It takes place annually in July and celebrates the culinary heritage of the region.

Things to Do in Cahors

The walk up to Mont Saint Cyr is worth it for the views alone, although it is also a steep, but pleasant walk. There are public areas for BBQ's at the top so you could take a picnic and enjoy your time up there for a little longer.

Being surrounded by a river means that there are also plenty of watersports to be had here. So make sure you don't spend all of your time on dry land...