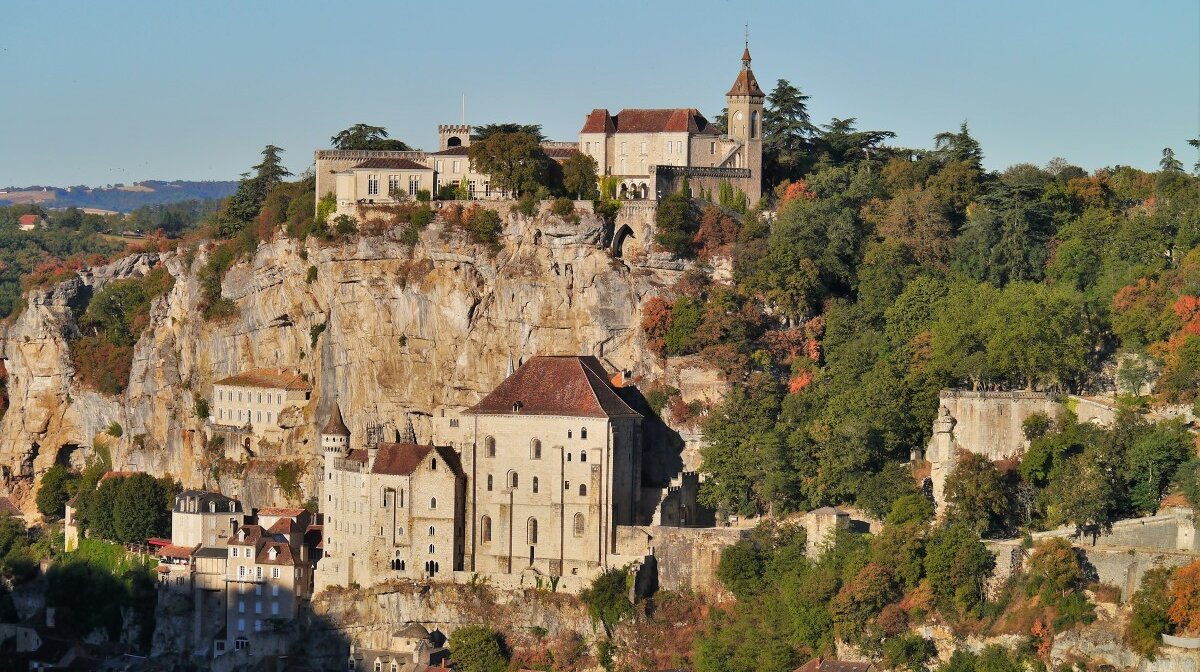 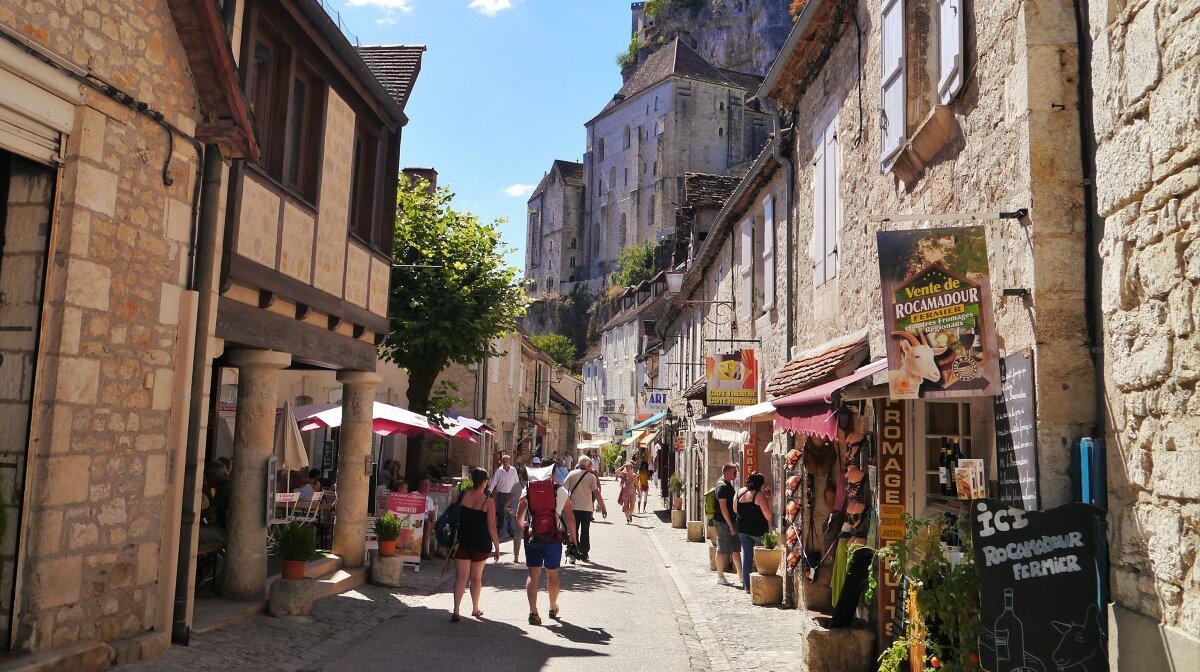 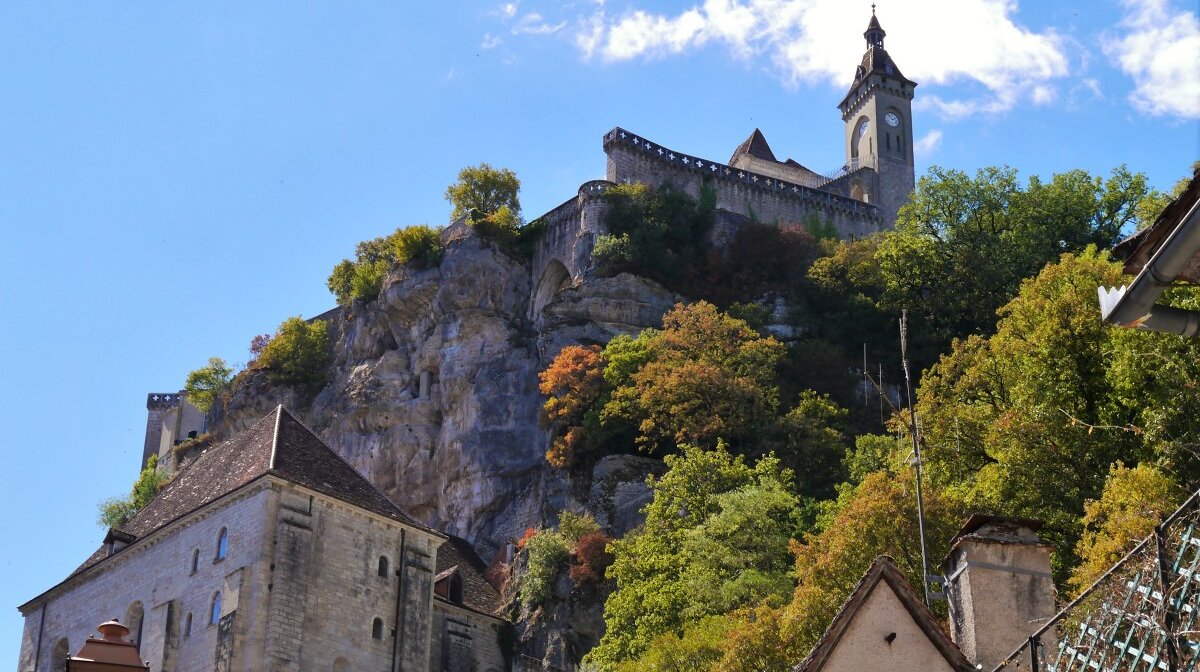 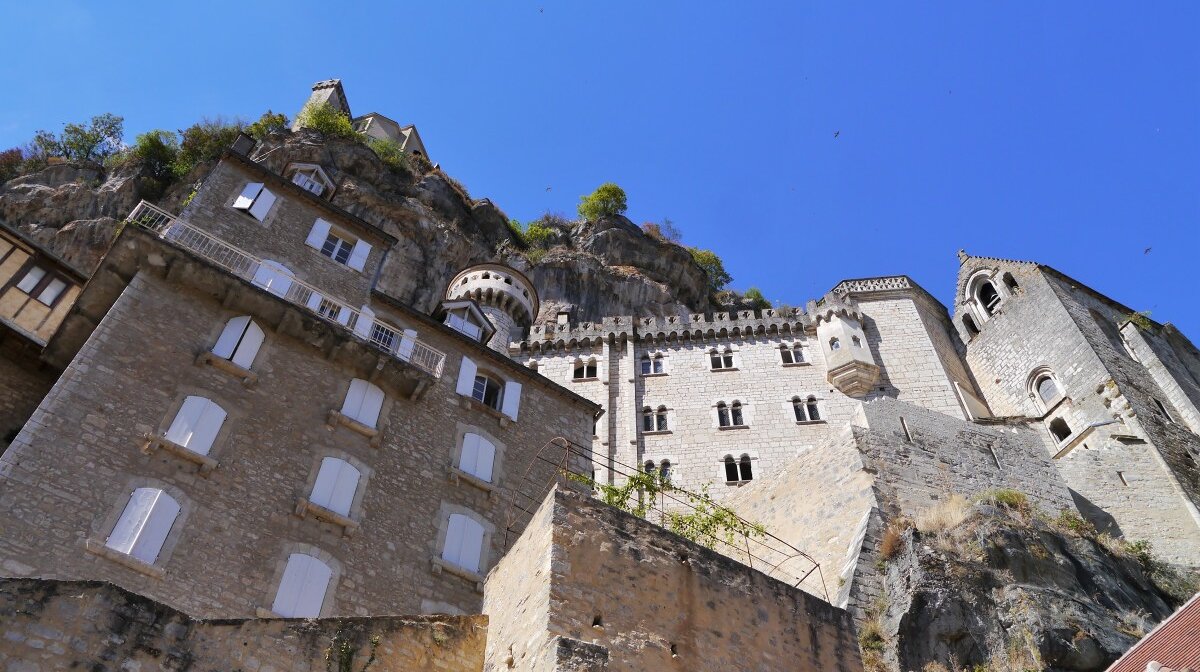 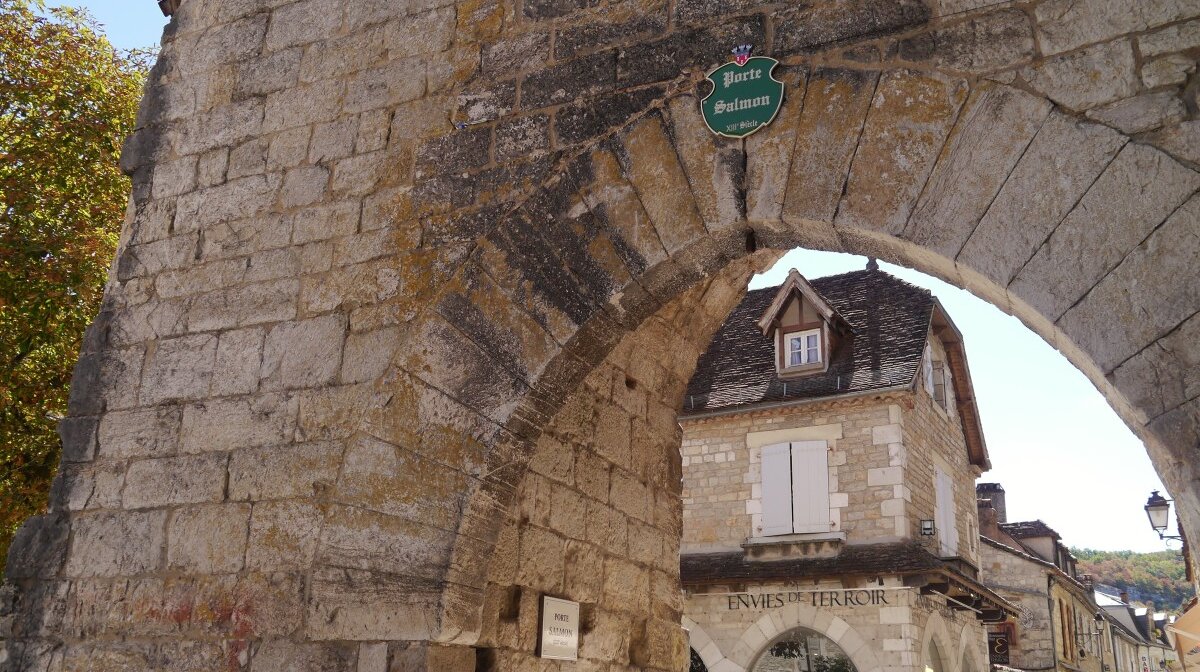 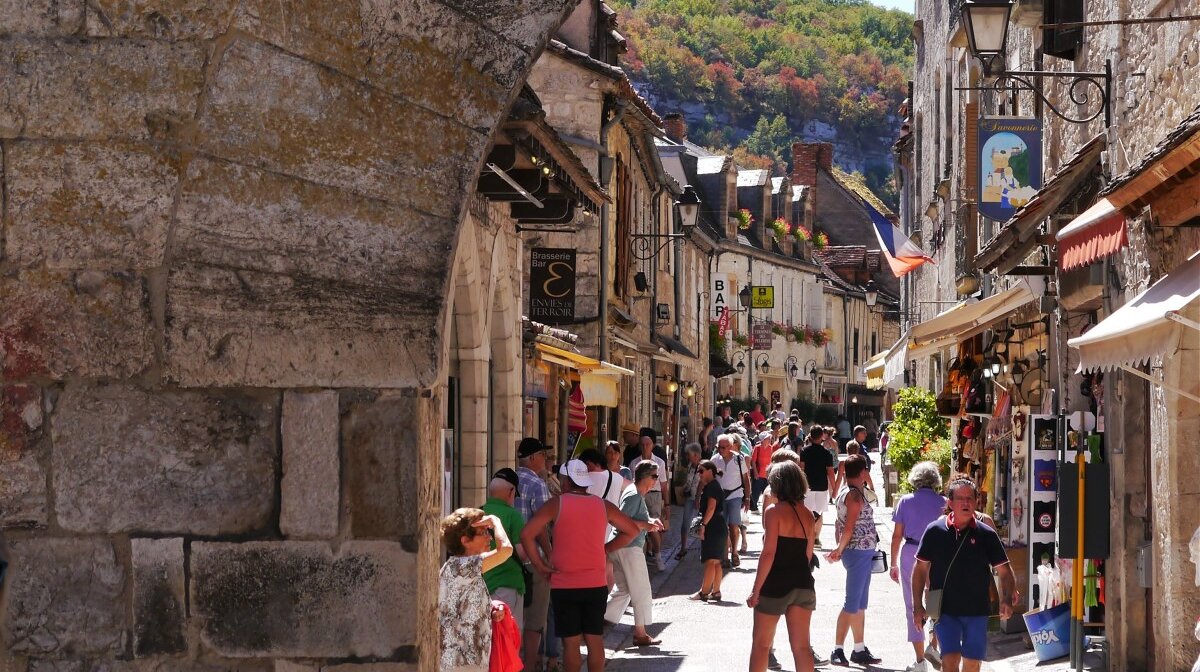 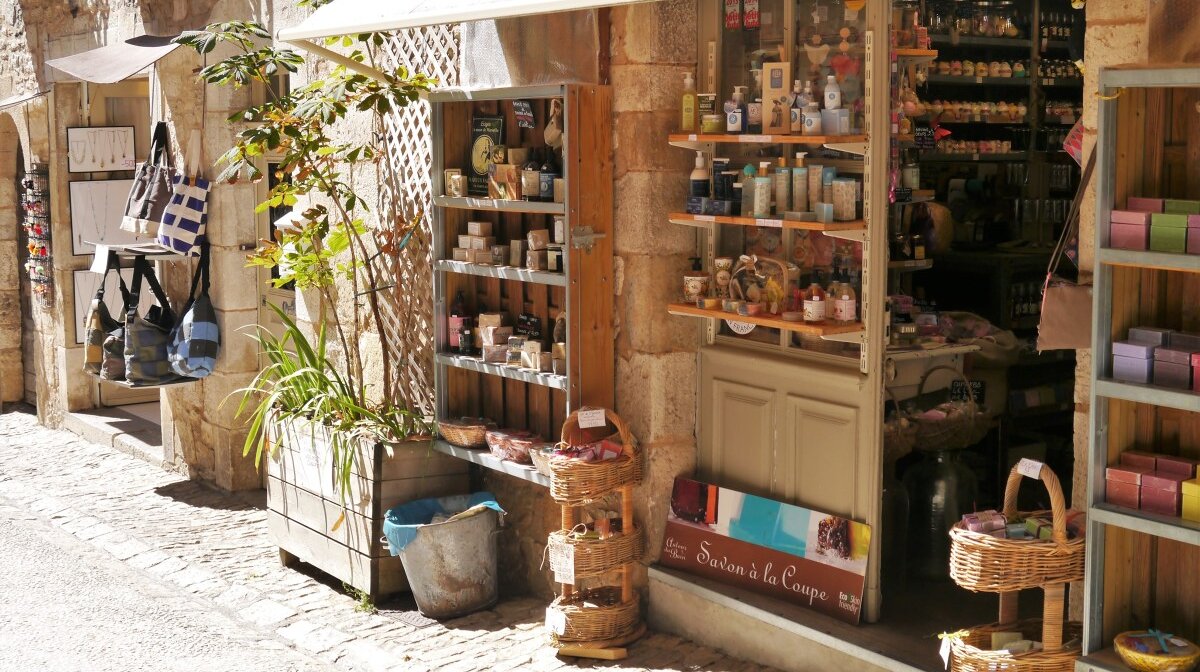 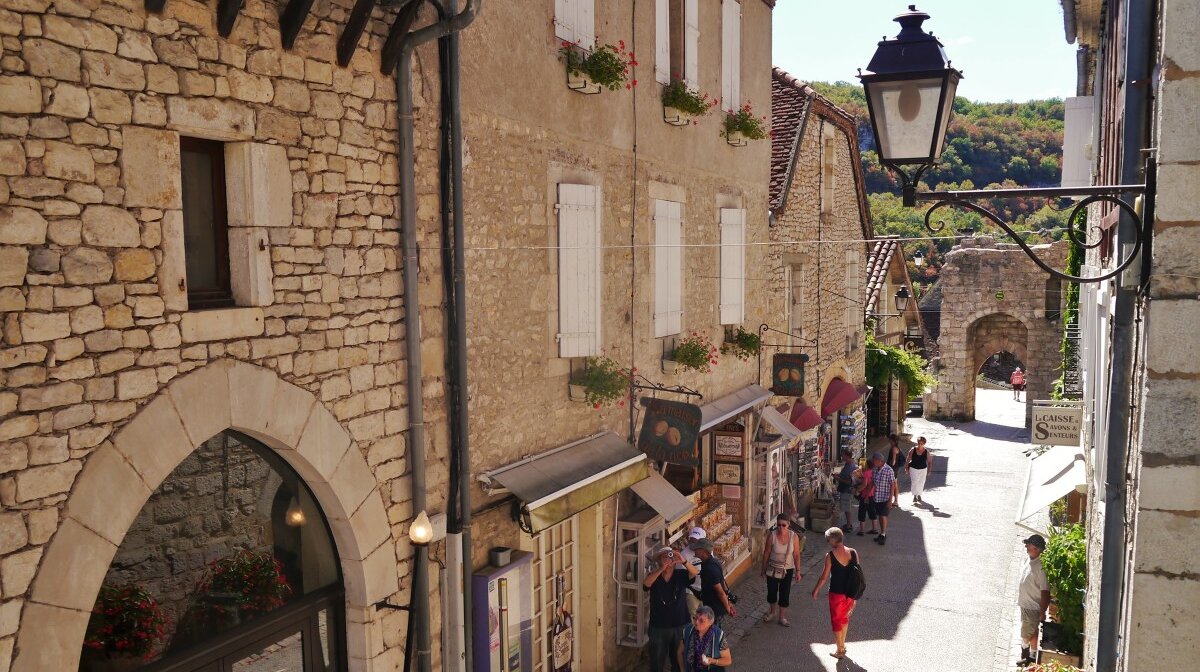 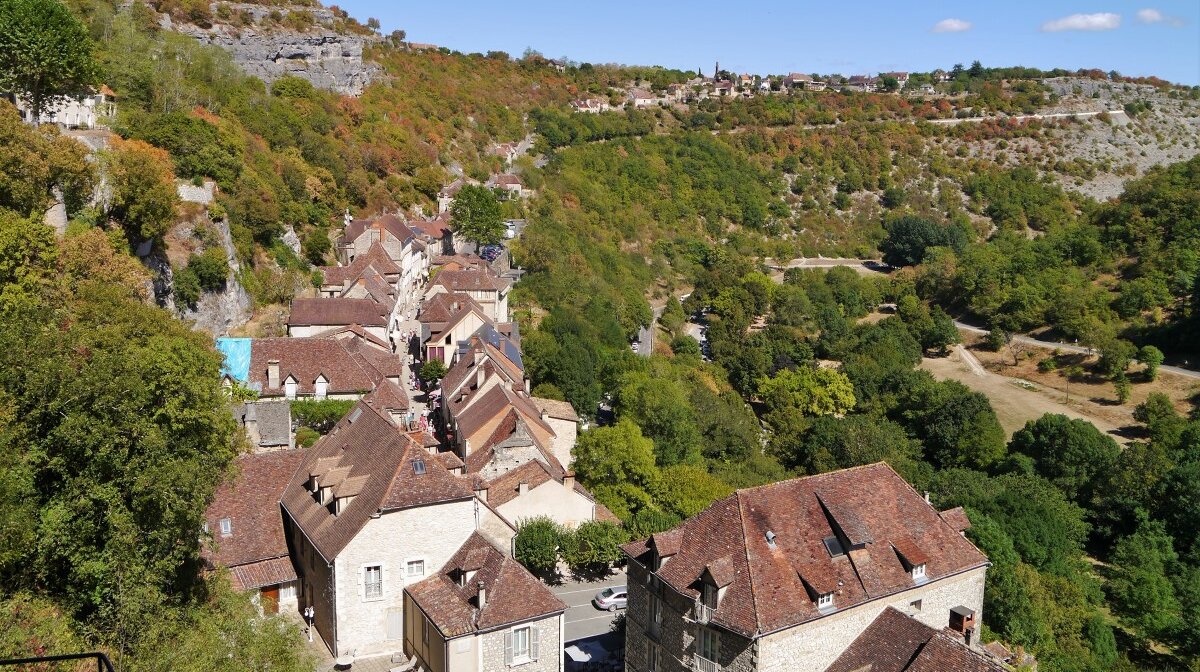 The cliff top town of Rocamadour

The heart of Rocamadour

Porte Salmon - gate to the town of Rocamadour

Pedestrian street in the heart of Rocamadour

Plenty of shops & boutiques in Rocamadour

The second gate entrance into Rocamadour

Looking back down onto the main street of Rocamadour

Perched on the side of a cliff, in a gorge above the river Alzou, Rocamadour has a breathtaking setting. This medieval town has been attracting pilgrims to its religious centre of churches and abbey for centuries.

La Cité Réligieuse is the main complex of religious buildings, accessed via the Grand Escalier staircase. It includes the Chapelle Notre-Dame, with its Black Madonna statue, and the Romanesque-Gothic Basilique Saint-Sauveur. The medieval main street is narrow and lined with boutiques and shops selling everything from souvenirs to foie gras, leather goods, hippy clothing and, of course, ice cream.

The town is also home to the famous appellation-controlled Rocamadour soft goat's cheese. Designated as a UNESCO World Heritage site in 1998 the town also forms part of the St James' Way pilgrimage route, better known as the Camino de Santiago.

Henry II, King of England, and Eleanor of Aquitaine are known to have visited the pilgrimage site of Rocamadour, as well as Louis XI and Charles IV. Legend has it that the preserved body of Zacchaeus (who would later become Saint Amadour) was found here, after the Virgin Mary had told him to come and live here as a hermit.

The Chapelle de Notre-Dame now houses the Black Madonna statue that the pilgrim Zacchaeus is said to have brought with him. This statue is made from two pieces of wood and is believed to have healing powers. According to the Book of Miracles written in 1172, the Black Madonna or, Our Lady of Rocamadour, cured diseases, delivered prisoners from persecution, rescued sailors and also protected many soldiers during war.

As well as being a pilgrimage site, the cliff walls are also said to house a fragment of the broken sword 'Durandal', once wielded by the 8th-century hero Roland. The story is similar to that of Excalibur in England and has been embellished over the centuries in song and poetry.

There are so many things to see and do in Rocamadur that it is hard to single out any one thing of interest. Just browsing the shops and boutiques in this town is a pleasure. But what people really come to see are the many chapels of La Cité Religieuse. This well-known pilgrimage site is set high on the cliffside and takes a fair bit of puff to reach as you climb the 216 stairs to the main esplanade. Clustered together you will find seven chapels with spectacular views over the Alzou valley below. A beautiful site to worship God.

In addition to the religious and medieval history of this town, you will find several prehistoric caves in the area. The Gouffre de Padirac is perhaps the most famous and popular of these, but even closer to home in the area of L'Hospitalet you will find the Grotte des Merveilles, which not only has incredible rock formations but also some examples of prehistoric art.

As you might imagine with a town which makes its own cheese, the Fete des Fromages Fermiers is an annual event that celebrates the magnificent Rocamadour AOC cheese. Celebrated on Pentecost Sunday each year there is a competition for the best farmhouse cheese, plenty of cheese tasting and traditional music.

Things to Do in Rocamadour

As we mentioned above, the walk around Rocamadour is a delight in itself. A rather long and in some places steep hike will bring you from the car park at the bottom, to the pilgrimage steps, and on further up to the chateau and L'Hospitalet at the top of the town. But if you prefer a more leisurely pace then you could jump on Le Petit Train which will take you from the lower car park up to the pedestrian street in the heart of the town. Even better still are the lifts that give you access to La Cité Religieuse and another one again up to the chateau. Although if you can walk you really should as you wouldn't want to miss anything!

On the outskirts of Rocamadour you'll also find plenty to keep the whole family entertained, from bird of prey shows to forests filled with monkies and aerial assault courses for all ages and skills.

There are several enticing restaurants along the main pedestrian street in the heart of the town. Many offering terrace views over the valley below and since the middle of the day is the hottest time and therefore less appealing for climbing the 216 steps to La Cité Religieuse...you might as well grab a table in the shade and enjoy the view and a good lunch.

There are a number of small hotels within the walls of the town itself. Staying at any of these will give you wonderful direct access to the town, parking within the walls and n doubt a stunning view over the valley below. Alternatively the upper area of L'Hospitalet also offers some good accommodation choices.

How to get to Rocamadour

Situated at the eastern reaches of the Dordogne region, just within the boundaries of the Lot, Rocamadour is a stunning town perched on the side of a rather dramatic cliff that overlooks the Alzou valley and river below. The Alzou is a tributary of the Dordogne.